Bi+ visibility in the media is a rare thing, we are more likely to see dragons and other fairy tale creatures on the big screen than a character who is explicit about their bisexuality.

This is why Call Me By Your Name is such a rare gem, not only is it an achingly beautiful film about young love, but both of the main characters are shown to be attracted to multiple genders.

Which is why it was the perfect choice for a Bi Visibility Day screening.

More than 140 people came along to the screening, and most of them stayed for the panel discussion afterwards about Bi Representation in the Media.

One important question raised; how do you show bi+ people when romance is not the focus of a film?

The answer is simple – have more characters actually say the word, show that we exist, and that we exist even when we are not in relationships.

Atomic Blonde is a great example of this, proof that a character doesn’t need to be bi for a reason, that we can be part of a story without it being solely about our sexuality.

While there has been an increase in the number of bi+ characters that we are seeing on the big and small screens, there’s still a long way to go before the full diversity of the bi+ community will get to see themselves represented. 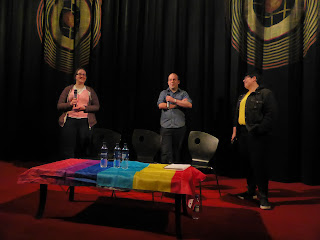 This event was made possible by the generous support of the Glasgow Film Theatre, who not only paid for the rights to show the film, and gave us the cinema for free!