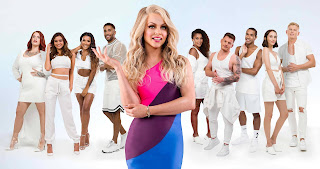 I’m going to admit that dating shows aren’t usually my thing, and I was worried that The Bi Life would be over-the-top reality tv at its worst.

But I’m happy to say that not only is it a dating show that I could watch without cringing, but it’s also some of the best bi+ representation that I’ve seen on tv.

Hosted by Shane Janek (and their drag queen alter ego Courtney Act), who is openly pansexual, as well as genderfluid and polyamorous. The fact that the host of the show understands what it’s like lends humanity to the show, and stops it from feeling like the freak show it could so easily have been.

It opens with Courtney talking about how half of all young people in Britain identify as something other than completely straight or completely gay, according to stats from YouGov in 2015. These stats are probably not surprising to the bi+ community as we are seeing a rise in young people identify as bi+, but to the rest of the public, it may be the first time that they’ve considered that people who are attracted to multiple genders not only exist, but are a significant part of the population.

The show is a mix of fly-on-the-wall style segments when the housemates go on individual dates, with the rest of the housemates watching from the luxury of the Barcelona villa. There’s also parties and social events where everyone can mingle with the lovely guests, including some of their dates. But the show also allows the housemates the chance to talk about their experiences in their own words.

And it’s not just dating and sex that they’re always talking about. There’s a lot of discussion about assumptions and misconceptions about bi+ people, and how this has impacted them and their relationships.

It doesn’t feel forced or scripted, and there’s something lovely about the housemates all supporting each other on their journey to figure out the complicated world of dating and relationships.

As I write this, I’ve only seen two episodes, and it’s been nice to see that the housemates have all bonded quickly. For a lot of the housemates, it appears to be the first time that they’ve ever had a network of other bi+ people that they can talk to honestly.

A lot of the housemates spoke about not having the opportunity to pursue same-sex relationships in their everyday lives, and how it can be difficult when everyone assumes that they’re straight.
Also, seeing men talk openly about their feelings, is a change from the (very few) dating shows that I’ve ever seen, where guys only ever talk about what they look for in a woman in terms of physical attributes.

The diversity of the housemates is refreshing to see, not just in terms of race, but also personality-wise. Often dating shows encourage and seek out extroverts, so it’s nice to see a mix of people; from the shy Michael, who has never been on a date before appearing on the show and is looking to get some experience dating so “he knows who’s right for him,” to Mariella who is looking for a long-term relationship, with marriage and kids.

Unlike a lot of popular dating shows with housemates, there’s also no prize money, and I think that helps to create a supportive and friendly atmosphere, as there’s no worrying about whether the other housemates are going to betray them and grab the prize money for themselves. Although a nice holiday in a Spanish villa, with a pool and good company, would be more than enough of a reward for most people.

Personally, I think the success of the show comes from the fact that the housemates being attracted to multiple genders isn’t the sole focus of the show, they’re shown as real and complex people looking for friendship and love, and they’re helping to break down stereotypes and misconceptions in the process.

The Bi Life airs at 9 p.m. on Thursday, channel E! and E! HD. Previous episodes are available to view through catch up tv.